CAFE = COMMUNITY ACTION FOR EVERYONE

These are community spaces for your group members to work on electoral projects (whatever it is they are working on – postcards, phone banking, texting, etc.).  Find an ongoing CAFE, or make your own. 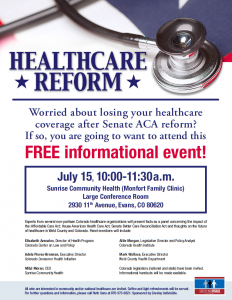 MoveOn is holding an emergency protest in Denver at 5pm tonight outside of Cory Gardner’s office. Details are on the Facebook event.

We must sound the alarm. Last night, Donald Trump fired FBI Director James Comey, who was leading an open criminal investigation into Trump’s possible collusion with Russia to sway the November election and it’s a terrifying last straw.

MoveOn members, allies, and Americans of all walks of life are converging on district Senate offices all across the country at 5:00 p.m. local time to make some noise until we get the truth about Trump and his cadre of advisors and their web of financial and foreign entanglements.

Our ask: Congress must establish an independent commission to investigate Trump. (One that he can’t fire!)

Details:
Colorado Senator Cory Gardner just voted to install one of the single most unqualified, incompetent, and corrupt people ever to be nominated to head the Department of Education.

We think he owes Colorado an explanation for the vote — and why he has been dismissive and unresponsive to the concerns of Coloradans about the DeVos nomination and other issues vital to our communities. And what better time to make a commitment to represent the people of Colorado than the day before Valentines?

Please join us right before noon Monday in the park next to Senator Gardner’s office. We’ll send a powerful message to the senator by hand-delivering a petition signed by more than 13,000 real Coloradans demanding that Senator Gardner come back to Colorado and hold open, publicly-accessible meetings to hear our concerns.

We will meet shortly before noon for a brief rally before a handful of petition signers attempt to deliver the petition to Senator Gardner’s office. If you can, please wear pink or red and bring a handmade sign expressing your concerns.

Here are some ideas to get you started:

We’re hoping to have members of the press at the rally, so please share this with other friends who are fed-up with Senator Gardner’s unresponsiveness.

Despite overwhelming public outcry in Colorado about the DeVos nomination, Gardner instead flew to Florida to raise money for the GOP. Gardner’s office says the number of messages from constituents have skyrocketed in January.

The office received 22,000 phone calls and 120,000 correspondences in January, dismissing the broadly as “paid activists” and out-of-state people. We know the truth. Thousands of real Coloradans have been ignored and written off by our elected Senator — and that is unacceptable.

The Senator needs to meet constituents face-to-face and show he is listening to them and not just beholden to moneyed interests.

The panel will include speakers from the 18th Judicial District, American Civil Liberties Union, Anti-Defamation League, Aurora NAACP, Aurora Police Department, Colorado Department of Regulatory Agencies and the Colorado Juvenile Defender Center and we will be joined by State Rep. Joe Salazar (HD 31).

Each panelist will make a short presentation, followed by Q&A.

You can help fix the Electoral College by taking action prior to the Colorado Senate committee hearing on Wednesday February 15 on the National Popular Vote bill.

The National Popular Vote bill (Senate Bill SB 17-099) would guarantee the Presidency to the candidate who receives the most popular votes in all 50 states and the District of Columbia.  It would make every vote for President equal throughout the United States.

Five out of our 45 Presidents have come into office without winning the most popular votes nationwide.  State winner-take-all laws are the reason why a candidate can win the Presidency without winning the national popular vote.  Under these state laws, all of a state’s electoral votes are awarded to the candidate receiving the most popular votes in each separate state.  If these state laws are not changed in this current era of close presidential elections (with the average margin in the national popular vote being only 5% since 1988), undemocratic outcomes will happen again.

“Each State shall appoint, in such Manner as the Legislature thereof may direct, a Number of Electors….”

The winner-take-all method of awarding electoral votes was used by only three states in the nation’s first presidential election in 1789 (and repealed by all three by 1800). It was never debated at the Constitutional Convention, and never mentioned in the Federalist Papers. It did not become predominant until 1880 — almost a century after the U.S. Constitution was written.

Under the National Popular Vote bill, the national popular vote winner will receive all of the electoral votes of the enacting states. The bill will takes effect when enacted by states possessing a majority of the electoral votes — enough to elect a President (270 of 538).  Then, when the Electoral College meets in mid-December,  the national popular vote winner will become President because the enacting states will represent at least 270 electoral votes. Thus, the Electoral College will represent the will of the voters in all 50 states (and DC).

Please join us at Skyline Park on 17th and Arapahoe, right outside of Sen. Cory Gardner’s office, on Saturday February 11th at 1:00pm to show our support for Planned Parenthood and to demand that Sen. Gardner oppose any actions being taken to defund Planned Parenthood

This event will feature speakers from the community and personal testimonials about the positive impact Planned Parenthood has had on the lives of Coloradoans. We will have a station for making donations to Planned Parenthood and materials for writing letters to Sen. Gardner. Organizers will collect letters to Sen. Gardner at the event to personally deliver to his office when we are scheduled to meet with his staff the following week.

We are expecting a huge turnout and we want to reiterate that this type of event does create a lot of noise politically. We will collect hundreds (or thousands!) of letters of support and raise much needed funds at the same time. All of this while coming together as a community and continuing to show that we are in this marathon and we will take these issues on, one by one, together. This is how we create change.

As much as we all would love to go to our local Planned Parenthood clinics and fight back against anti-choice protests planned for the day of our rally, those actions will not create change and could in fact be harmful to the very patients, providers, and support staff we seek to support. What we can do is hold our representatives accountable and raise funds to keep the doors open at Planned Parenthood clinics in the Rocky Mountain region. OUR ORGANIZERS WILL NOT HOLD ANY GATHERING OR COUNTER PROTEST AT PPRM.

Semper Fi literally translates to “always faithful.” I am guessing the USMC is feeling some shame about Representative Mike Coffman’s cowardly behavior when he literally snuck away from his constituents this past week and then pledged allegiance to Americans before his own District 6.  Thank you for Nelson Garcia at 9 News for covering the story first 150 citizens of Representative Mike Coffman wanting to meet with him to discuss the repeal of the Affordable Care Act.  Not only did Rep Mike Coffman leave 6 minutes early without meeting with over 80 constituents, his staff had the audacity to call these constituents #activists who were up to #antics.

#Indivisible worked hard to get the story picked up by several media sources include MSNBC, Time, The Denver Post, Slate, Huff Post, Salon, and the New York Magazine.

Everyone makes mistakes, however, you take responsibility and apologize. Is this what Rep Mike Coffman did? Not even close…you can see the tweet from @TeamCoffman below referring to concerned citizens as angry activists committing antics. Feel free to reach out to Coffman’s District Director Ben Stein at 720-748-7514 or email him directly at [email protected]. You can also Dina Ellis [email protected] or Jeremy Lippert at [email protected] too.

Does Rep Mike Hoffman not realize the majority of Americans DO WANT insurance and that he should be concerned more with the 6th District anyway.